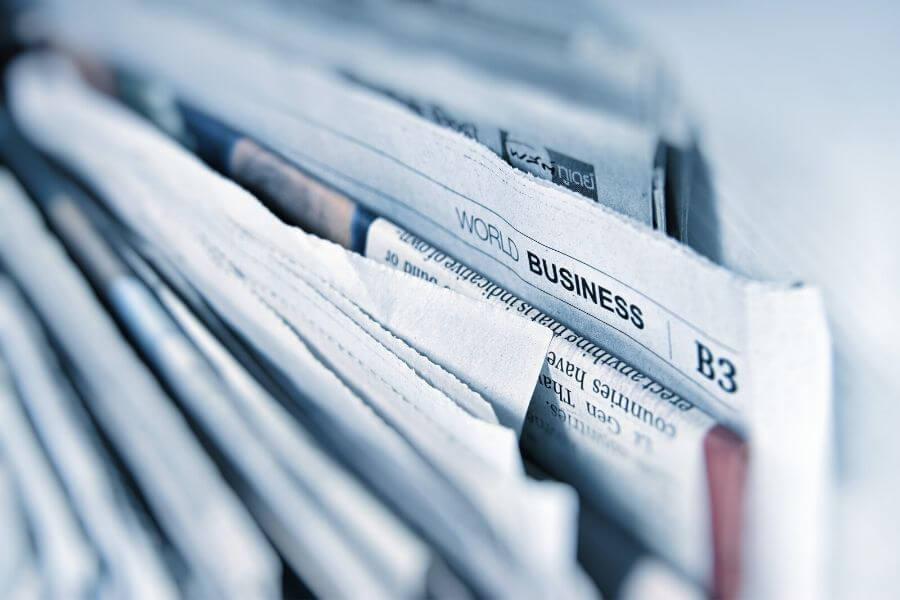 The indicator “Protecting Minority Investors” is one of the top ten indicators in the Doing Business Report 2020 (hereinafter referred to as “Report 2020”) published by the World Bank Group. China ranks 28th in the topic of “Protecting Minority Investors” in Report 2020, moving up 36 places from 2019 and 91 places from 2018 respectively. The article below will analyze the great progress that China has achieved in minority investor protection in Report 2020, so as to correctly measure the strength of Chinese legal protection of minority investors.

I. What is the methodology for the indicator “Protecting Minority Investors”?

The indicator “Protecting Minority Investors” focuses on how various economies can reasonably protect the legitimate rights of minority investors in directors’ self-dealings with significant conflicts of interest. The methodology is based on The Law and Economics of Self-dealing written by Simeon Djankov and other scholars in 2008. [1]To make the data comparable across economies, the World Bank Group evaluates how well are minority investors protected from conflicts of interest in the same case via questionnaire analysis.

In this case, [2]Mr. James owns 90% of the Seller and 60% of the Buyer. The Buyer is a listed company with a board of directors, a chief executive officer (CEO) and a supervisory board. The Buyer has not adopted specific bylaws or articles of association that go beyond the minimum requirements of applicable law. James is a director of the Buyer and appoints another two directors on the Buyer's five-member board. The Seller operates a chain of retail hardware stores with unused fleet of trucks. James proposes that the Buyer purchase the unused fleet of trucks to increase sales with the price equal to 10% of Buyer’s assets and is higher than the market value. In this transaction, all required approvals are obtained and all mandatory disclosure are made (i.e. the transaction was not entered into fraudulently). Because the transaction causes damages to the buyer, the shareholders file a lawsuit against Mr. James, CEO, and the directors who approved the transaction.

Based on the aforementioned case model, the World Bank Group comprehensively measures the protection of minority investors in director self-dealing through a combination of secondary indicators, such as the extent of disclosure index, the extent of director liability index, and the ease of shareholder suits index, specifically including over forty issues. Please kindly find China's scores in the topic of "Protecting Minority Investors” in the past five years as below. 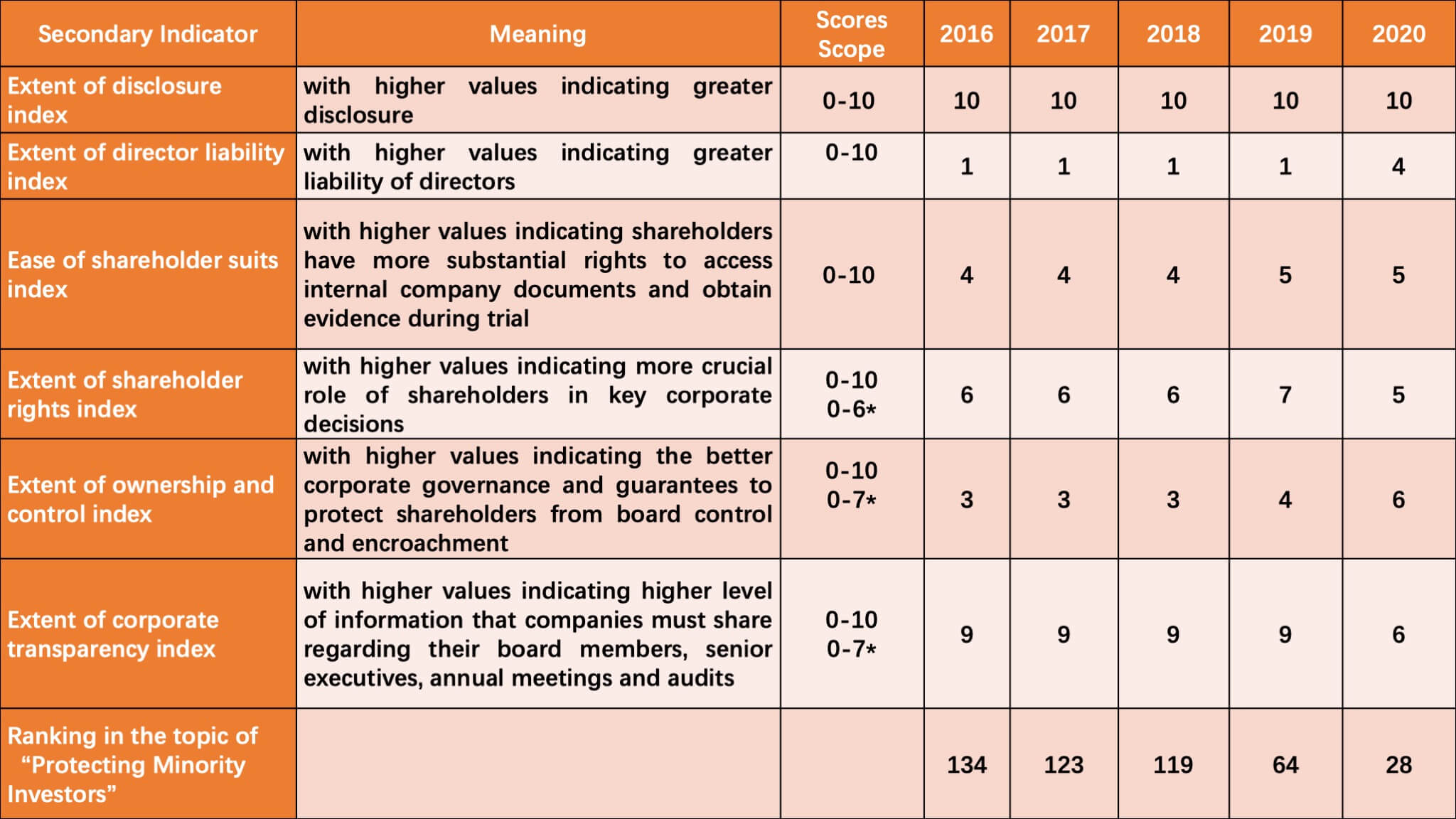 (* indicates the scope of the different score used in Report 2020)

As can be seen, China's scores on the topic of “Protecting Minority Investors” have shown a steady upward trend in recent years. And especially in Report 2019 and in Report 2020, China has achieved more rapid improvement. Specifically, China has achieved the full mark in the extent of disclosure index for five consecutive years, showing that the disclosure system in directors’ self-dealing has been greatly improved in China. Comparatively, China loses its points mainly in the extent of director liability index and the ease of shareholder suits index.

II. Contributions of China's newly-amended laws and regulations to its ranking in Report 2020

In fact, based on the methodology, China carefully studies the World Bank indicators, learns from applicable legal systems and makes adaptive amendments to its relevant laws and regulations, which is the major reason why China has made such great progress in the "Protecting Minority Investors" indicator in the past two years. The details are as follows:

1. Is evidence of unfairness, a conflict of interest or damages sufficient to hold Mr. James liable for the damage that the transaction causes to the company?

China did not score on this issue in Report 2018 and Report 2019, because the World Bank Group believed that according to the Listing Rules of the Shanghai Stock Exchange（上海证券交易所股票上市规则, hereinafter referred to as “Listing Rules”）, related party transactions must be approved by the general meeting of shareholders, and James, as a shareholder with conflict of interest, should abstain from voting; even if the transaction only requires the consent of the board of directors, James should also abstain from voting in the board meeting. [3]In short, James did not participate in the voting and did not damage the interests of other shareholders by "taking advantage of his affiliation", so he could not be held liable. [4]

However, China no longer loses points in Report 2020, because the Supreme People’s Court (SPC) issued the “Provisions on Several Issues Concerning the Application of the Company Law of the People's Republic of China (V)”(关于适用《中华人民共和国公司法》若干问题的规定（五）, hereinafter referred to as “Judicial Interpretation of Company Law (V)”) in 2019. Article One thereof stipulates that the satisfaction of legal procedures cannot exempt directors from liabilities in his or her self-dealing. Therefore, the problem of proving “taking advantage of the affiliation” is solved, which makes it possible to hold James liable.

2. Must Mr. James pay damages for the harm caused to Buyer upon a successful claim by shareholders?

As mentioned above, James could not be held liable in China in Reports 2018 and 2019, and subsequent judicial remedies, such as paying damages, were not available. As a result, in this issue, China still got a score of 0 in those two years. However, in accordance with Article One in Judicial Interpretation of Company Law (V), James, as a controlling shareholder and interested director, is imposed with increased liabilities, so China scores in this issue in Report 2020.

3. Can shareholders remove members of the board of directors without cause before the end of their term?

China lost points on this issue in Reports 2018 and 2019, because pursuant to the PRC Company Law and Guidelines for Articles of Association of Listed Companies (上市公司章程指引, [5]hereinafter referred to as the "Guidelines") issued by the China Securities Regulatory Commission (CSRC), shareholders had the right to change directors only provided that there were substantial reasons for the change or specific trigger events occur, such as the resignation of directors. By modifying the applicable regulations and rules, it is clarified that directors can be removed by shareholders before the expiration of their term. [6]Thus, China scores in this issue in Report 2020.

4. Is a subsidiary prohibited from acquiring shares issued by its parent company?

As China had no specific regulations on relevant issues before, China’s answer to this issue was “No” in Reports 2018 and 2019. For this reason, the Shanghai Stock Exchange revised its Listing Rules in 2019, [7]stimulating that with a  few exceptions, it is prohibited for the listed company's subsidiaries to acquire the shares issued by the listed company itself.

5. Must Buyer pay declared dividends within a maximum period set by law?

According to Article 4 of Judicial Interpretation of Company Law (V) and Article 154 of the Guidelines, it is clear that the dividend distribution of non-listed companies must be completed within one year upon the date of announcement, while the listed companies should complete the dividend distribution within two months after the approval of the general meeting of shareholders. As a result, China also scores on this issue in Report 2020.

In conclusion, due to the modification of relevant regulations and rules, China's scores in the topic of “Protecting Minority Investors” have been greatly improved, and its ranking in Report 2020 surpasses the United States (36), France (45) and Japan (57) for the first time in this topic. However, it should also be realized that China still has shortcomings and areas for further improvement. For example, China has failed to score in some issues for three consecutive years, such as “Can shareholders hold the other directors liable for the damage the transaction caused to Buyer”, “Must Mr. James repay profits made from the transaction upon a successful claim by shareholders?”, “Can a court void the transaction upon a successful claim by shareholders?” and “Is it forbidden to appoint the same individual as CEO and chairperson of the board of directors?”. 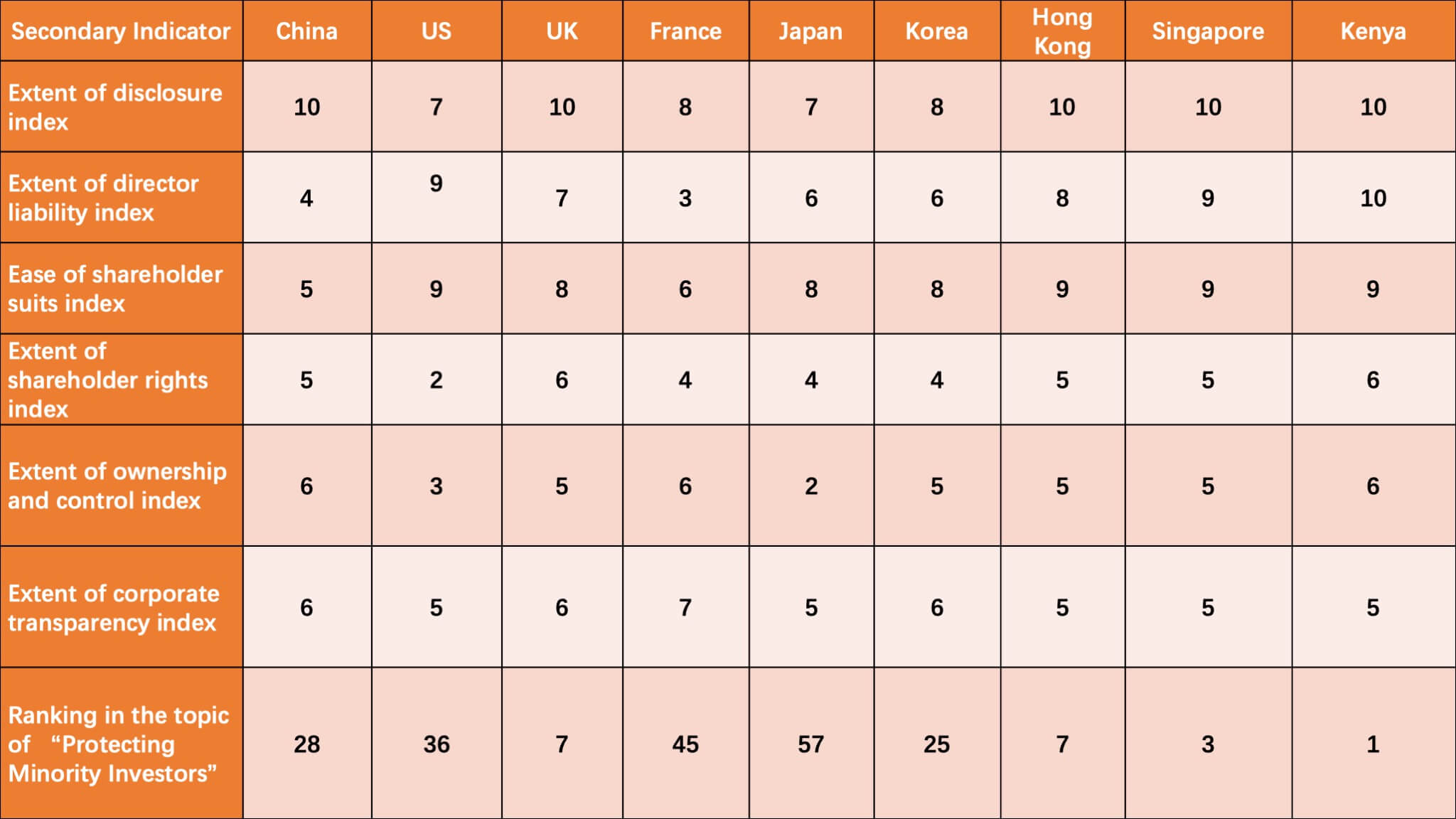 Table 2: Comparison of the Scores of 9 Economies in the Indicator “Protecting Minority Investors” in Report 2020

As shown in the table above, the UK, Korea, Hong Kong, Singapore, and Kenya all rank ahead of China. In particular, in the extent of director liability index and extent of ease of shareholder suits index, China scores much less than the others.

In conclusion, China’s modification to relevant regulations and rules have significantly contributed to China’s huge progress in the indicator “Protecting Minority Investors”, with its scores rising from 62 in Report 2019 to 72 in Report 2020. CJO will continue to observe how China in the future will take new reformative measures to improve its ranking in minority investors protection based on the actual situation in China.

Photo by AbsolutVision(https://unsplash.com/@freegraphictoday) on Unsplash