Who Can Serve as Judges in China? 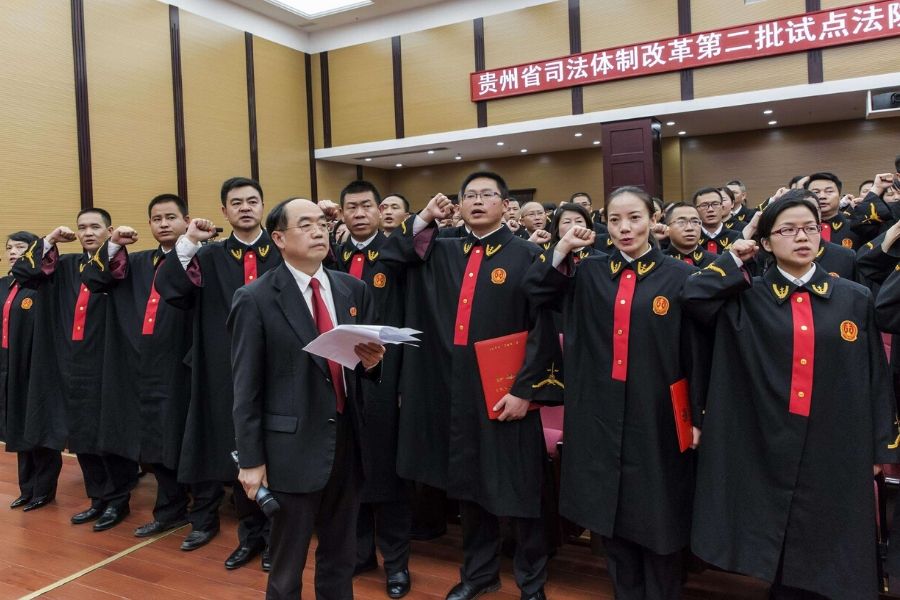 Law graduates, public civil servants, staff members of the Communist Party of China (CPC) and veterans are the main sources of candidates for judges in China.

Prior to serving in the courts, these people are usually the leaders of government departments or the CPC organs. They come to the courts mainly to serve as presidents, vice-presidents and other leadership positions in the courts. To explain this phenomenon, we need to understand the local political power structure in China.

China's political power can be roughly divided into four levels from the central to local, namely, the central authority, provinces, cities, districts and counties. Each level has its own CPC organization (i.e. CPC Committee), government and courts.

After the CPC decides on the candidates for the court leadership, according to the Constitution, the people's congress at the same level as the courts will elect or appoint them.

When the CPC chooses the court president, it does not necessarily select from the court's internal personnel, more often, it also selects from the government departments and inner-party organs. Therefore, if we look at the curriculum vitae of many Chinese court presidents, we will find that they often did not work in the courts before assuming the post.

Following the enactment of the Law on Judges in China in 2001, judges are required to pass the National Judicial Examination (similar to the bar exam). Usually, most of the people who pass the exam are law graduates. As a result, in the past decade, law graduates have gradually become the main source of judges.

In most courts, graduates enter the courts in this way:

(3) Serving as Law Clerks: Graduates who pass the employment examination will first serve as law clerks of the courts. Generally speaking, law clerks are divided into two types, one is those who are recruited through the aforementioned examinations and are likely to become judges in the future. Law clerks of this type are actually apprentices of judges. The other is those who are hired only as law clerks in the literal sense, with a less strict hiring process and lower requirements, and will not normally have the opportunity to become judges in the future. The law clerks in this post refer to the former.

(5) Acting as Assistant Judges: After several years' work (usually at least three years), with the approval of the CPC organization (i,e. CPC Group) in a court, law clerks are appointed as assistant judges by the court president. The CPC Group in a court is usually composed of the court president, the vice presidents, the director of the Political Department (in charge of personnel), and the director of the discipline inspection (in charge of inner-party discipline).

Since most courts require that law clerks not exceed a certain age (e.g. thirty) when recruiting them, this results in the fact that most law clerks actually enter the courts just after graduation from law schools, which leads to two phenomena: first, judges are generally very young, for example, the average age of judges in many primary courts is only over thirty; second, most judges have no other professional experience before, in other words, they enter the courts directly from law schools. Consequently, many judges may not have a deep understanding of the facts and background of a case.

3. Veterans, Who Are Already Rare in Chinese Courts

Before 2000, Chinese government organs, judicial organs, and the CPC organizations usually accepted veterans (usually military officers) and assigned certain positions to them, and the courts also did the same. In the 1990s, the phenomenon of "veterans entering the courts"(退伍军人进法院) was criticized by the legal profession community of China and caused a wide range of debate. Since the promulgation of the new Law on Judges in 2001, this phenomenon has gradually decreased because most veterans cannot pass the Judicial Examination. Today, nevertheless, in many local courts, a small number of veterans can be seen holding other non-judge positions.

These above-mentioned three types of people constitute the current personnel structure of Chinese judges. Although Chinese courts are adjusting the system for the election of judges, the sources of personnel, especially the first and second sources, should not change much. What will change is the way in which these people become judges.