On the basis of Chinese traditional judicial system, recent years have seen many newly established Chinese courts. Therefore, it seems difficult for those who are unfamiliar with China’s court system to have a comprehensive understanding of the Chinese court system. In this regard, we depict this latest structure of China court hierarchy.

I The four-level system of Chinese courts

Chinese courts are divided into four levels and presidents of Chinese courts at different levels are elected by the people's congress (the organ of state power exercising legislative powers, etc.) at corresponding level as below:

According to incomplete statistics, nowadays there are approximately 3,581 courts in mainland China (excluding Hong Kong, Macao and Taiwan), including about 32 high people’s courts, 409 intermediate people’s courts and 3,140 primary people’s courts. 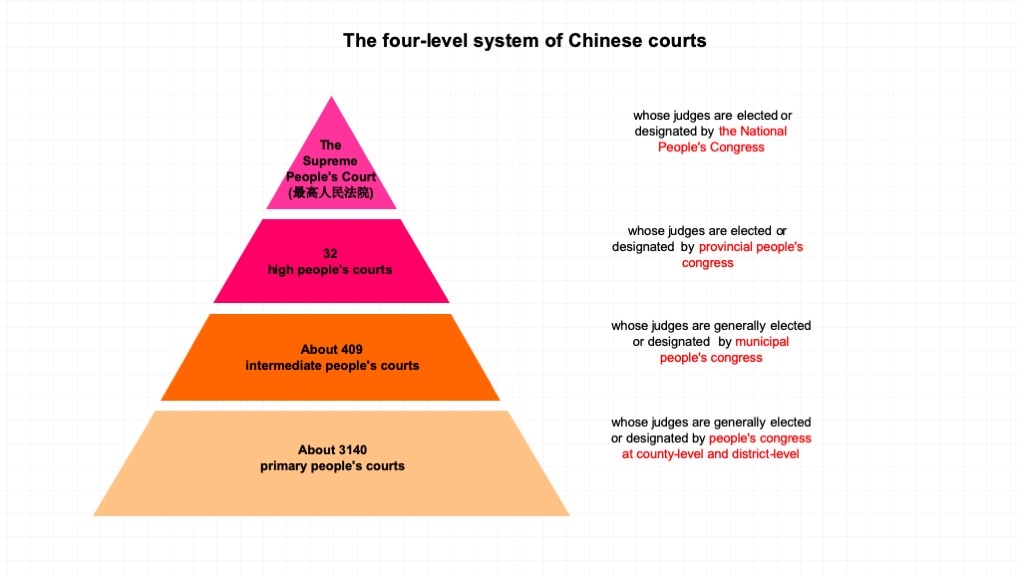 In addition, it is often seen in news that China has newly established some “tribunals”. These "tribunals" are not independent courts, but only integral parts of the courts. The judgments made by the tribunals are deemed as those made by the courts to which they belong. For example, the Beijing First Intermediate People's Court established the Beijing Bankruptcy Tribunal, the ruling of which is deemed as a ruling rendered by Beijing First Intermediate People's Court.

II The classification of Chinese courts

Chinese courts can be divided into three categories: the SPC, local courts, and specialized courts.

The SPC is the judicial organ at the highest level in China. In addition to hearing specific cases, the SPC is also responsible for formulating judicial interpretations. Judicial interpretations are a set of rules formulated to harmonize the courts’ understanding of specific legal provisions and to unify the trial standards. In practice, they have equal effect to the law.

The SPC currently has a total of 33 permanent divisions. Most divisions are based in Beijing headquarter, while some are located in other cities, including six circuit courts and two international commercial courts.

Six circuit courts were established in Shenzhen, Shenyang, Nanjing, Zhengzhou, Chongqing, and Xi'an, which are responsible for handling cases respectively in southern, northeast, east, central, southwest and northwest part of China. Cases from northern China, certain special types of cases, such as intellectual property, maritime disputes, and foreign-related commercial disputes are handled by the SPC headquarter. The judges of the circuit court generally rotate every two years.

China is composed of several provincial administrative regions, and the SPC is the higher court of high people’s courts at provincial level.

The railway transport courts and various military courts of the People's Liberation Army of China are also specialized courts, which, however, will not be discussed in this article.

In addition, some local courts also have the characteristics of specialized courts. For example, although the Beijing Fourth Intermediate People's Court is not a specialized court, it handles almost all foreign-related commercial cases and all arbitration judicial review cases within Beijing.

III Separate functions of courts at all levels

The first-instance civil and commercial cases are heard in courts in different levels, which is mainly determined by the type of case and the amount in controversy, and the standards in different regions are also different. Take foreign-related commercial and trademark infringement cases in Beijing courts as an example: 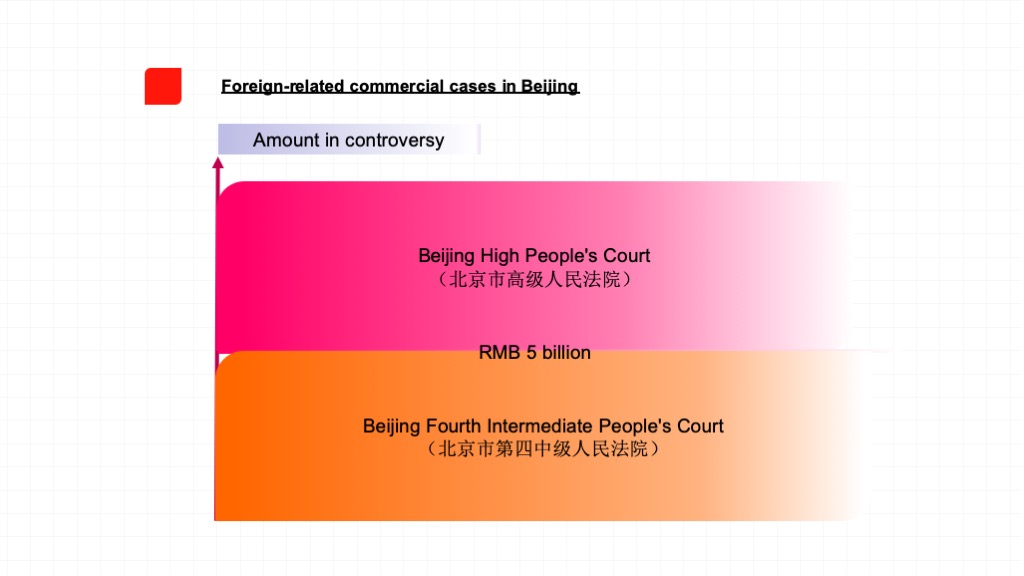 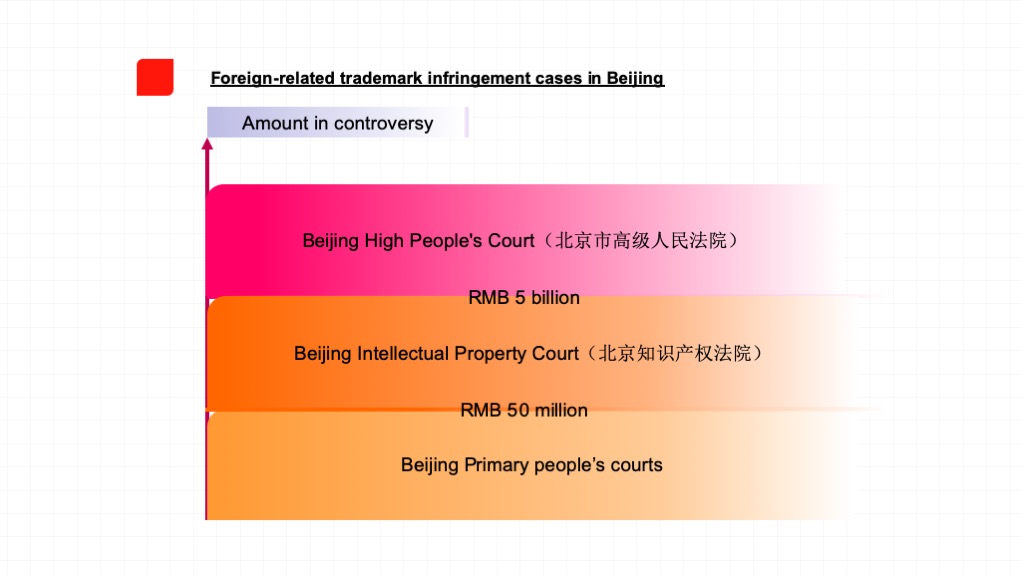 In addition, leapfrog appeal will not be sustained in a vast majority of cases in China, and the parties can only appeal to the higher court of the first instance court. The only exception is the intellectual property case with strong professionally technical feature: even if the court of first instance is an intermediate court, the appeal of second instance shall be directly heard by the SPC’s “Intellectual Property Tribunal” , rather than by the high people's court at the provincial level.